Champions with Hooks & Pulls in League of Legends 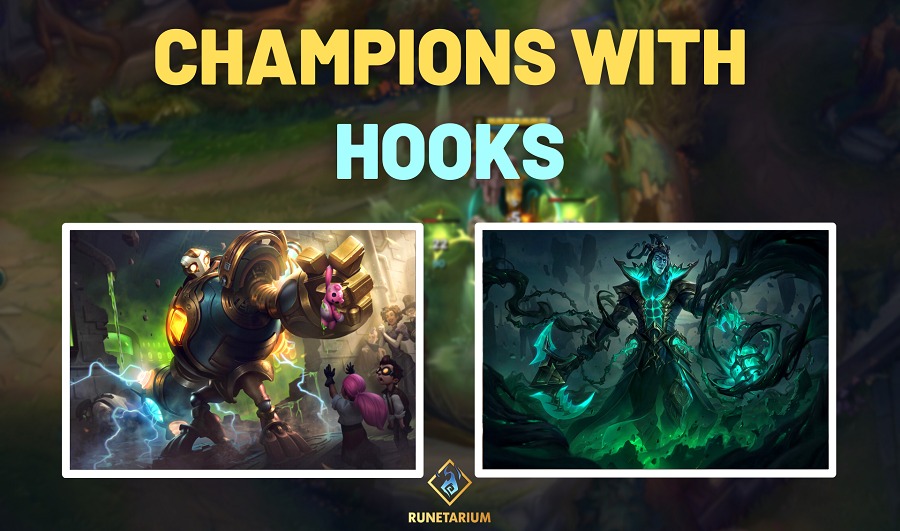 Displacing an enemy champion with a hook ability almost always sets up a kill opportunity for your team in League of Legends.

Hooks or pulls are types of abilities that drag enemies closer toward you so you and your teammates can instantly attack them. There aren’t too many such spells in LoL but those that exist are very impactful on the outcome of every fight.

In this post, I’ll explain how each hook/pull ability works and how it allows the champion to dominate the battlefield. Starting now!

These Are the Champions with Hooks & Pulls in LoL:

We all know that the OG hook champion in League of Legends is Blitzcrank. He’s been a part of the game for as long as we can remember. And his most important ability is his Q – Rocket Grab.

When Blitzcrank connects his Q, the ability pulls the enemy champion towards him almost instantly. The animation is pretty quick and the hitbox is decent too. It allows Blitz to catch most enemies he comes close to, so it’s a good ability overall.

The cool thing about Rocket Grab is that it actually does a lot of damage when Blitzcrank builds full AP. It’s a magic damage type of spell that has a huge AP ratio.

Most commonly, Blitzcrank’s Q is used to engage a fight or catch a single enemy champion. After pulling them in melee range, Blitz players usually knock that target up with E and create a kill setup for their ADC. Here are the best ADC partners for Blitzcrank.

Even though Thresh is often seen as the second most popular hook champion in League of Legends, his pull ability works completely differently than that of Blitzcrank.

First of all, Thresh’s Q, Death Sentence, doesn’t pull the target all the way next to him. Instead, it drags the target towards Thresh two times, approximately cutting the distance between him and his target in half.

However, the great thing about Death Sentence is that Thresh can reactivate it to pull himself and dash next to the target. This second cast is optional and Thresh players can choose whether to enter the danger or not.

While the target is being tugged by Thresh’s hook, they’re effectively stunned. But they can Cleanse or QSS the hook in order to remove it, so be aware of that.

There are many tricks that Thresh players do with his Q besides engaging a fight and picking kills around the map. For example, they pull themselves toward the dragon while leaving a lantern behind so that their teammates can dash over the wall too.

So, Thresh’s Q is a highly impactful spell too!

Read Also: Champions with Traps in League of Legends

The thing I love about Nautilus’ Q, Dredge Line, is that it’s a mix between Blitzcrank’s Q and Thresh’s Q. It’s a pull-and-dash sort of spell that’s extremely powerful at all stages of the game.

So, when Nautilus hits an enemy champion with his hook, he effectively meets his target in the middle. The ability pulls the target toward him while dashing him toward the target at the same time.

Dredge Line’s animation is swift so this all happens very quickly. The good thing here is that Nautilus can instantly auto-attack the hooked target to apply a root effect through his passive.

Nautilus’ Q has a really big range and a seriously broken hitbox. It can sometimes catch an enemy when you’ve clearly missed them, so it’s a powerful tool for setting up fights in LoL.

And lastly, since Dredge Line also does magic damage and has a huge AP ratio, Nautilus can also go full AP to one-shot players with his hook. It’s a fun playstyle that I recommend you try out!

Some players don’t even count Pyke’s Q, Bone Skewer, as a hook/pull ability in LoL but they’re very wrong. It is a great spell for dragging an enemy champion toward you and creating a favorable kill opportunity for your team.

Here’s how it works.

Pyke players can hold the Q button to charge up the spell’s animation. And when they release the button, Pyke flings the dagger that pulls the first target hit towards him. This works both against enemy champions and minions as well as jungle monsters.

Pyke’s Q does physical damage and it’s often combined with his E, Phantom Undertow, which stuns the target. Combined, the two abilities can CC an enemy champion for over 2 seconds, allowing Pyke and his ADC partner to win any 2v2 skirmish in the bot lane.

The distance that Pyke can pull an enemy isn’t that great but it’s definitely impactful. Depending on where you stand, the ability can even drag the target over walls, trapping them and forcing them to use Flash.

So overall, Pyke’s Q is disgusting to play against!

Read Also: Champions with Execute Abilities in League of Legends

Other Champions with Pull/Hook-like Abilities in LoL

Besides the 4 champions with original hook mechanics in League of Legends, there are others with less impactful pull abilities. They usually have a shorter range and serve only to help those champions during combat.

Each of these abilities works differently and has unique strengths in League of Legends.

As you can see, the most powerful champions with hooks or pulls are all supports. This is because hooks and pulls are utility tools made for engaging fights and creating kill opportunities which are definitely parts of the support’s job in League of Legends.

So, I hope you found this guide informative and helpful!

Read Also: The 7 Most Unique Champions in League of Legends