Top 5 Best ADCs to Play Against Assassins Like Zed 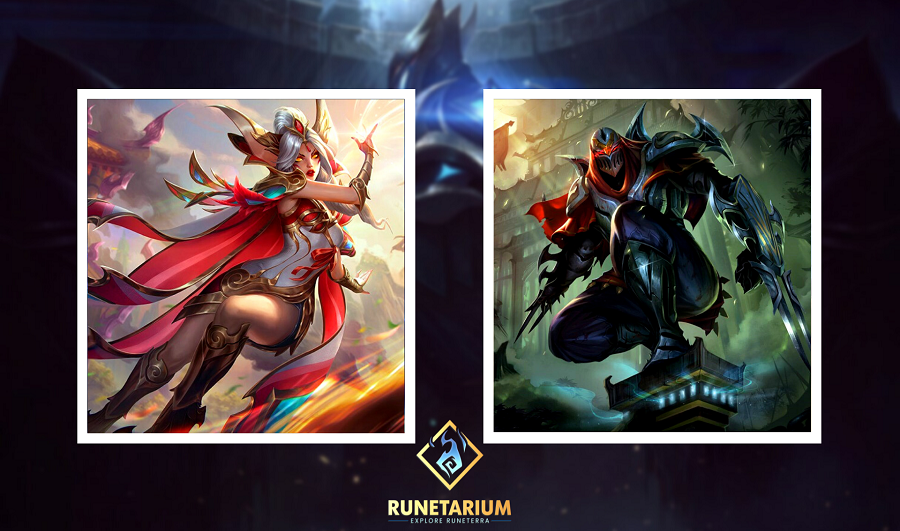 Dealing with assassins like Zed as an ADC in LoL is super stressful. These champions always have enough damage to one-shot you, no matter what their KDA is. So if you don’t have the right marksman in your hands, Zed, Fizz, and Qiyana will always have an advantage over you.

In this post, I’ll go over the 5 best ADCs for countering assassins like Zed in League of Legends. These are generally strong picks in season 12 and you can play them into any matchup. But they also have great tools for dealing with assassins in one way or another.

So if you were wondering how can you beat Zed and the other assassins in LoL as an ADC, scroll down to read more!

The first ADC champion I want to focus on here is Ezreal. Ezreal has tons of damage, mobility, and range. And each of these 3 characteristics works well against assassins.

Here’s what I mean.

Ezreal is one of the best poking marksmen in LoL. His Q – Mystic Shot can easily bring an assassin like Zed to 50% HP if it hits more than once. On top of that, Ezreal’s range allows him to remain in a safe position while dealing damage with his abilities.

On top of that, Ezreal’s E – Arcane Shift is basically Flash on 15 seconds cooldown. This is an incredibly powerful ability since you can use it to dodge everything. Most assassins have a combo of cooldowns that they use to one-shot you. So, jumping away from it is one of the best things you can do.

For example, when Zed uses his ultimate on you, you can quickly jump away with your E. Many Zed players dump all of their damage at once, so you have good chances of dodging it and escaping.

Of course, this works for other assassins too. If Qiyana jumps on you and you’re near a terrain, make sure to use your E immediately as Ezreal. Qiyana players will always go for a kill on the ADC if they stand next to a wall.

So, Ezreal should take advantage of his range and damage to keep the assassins away. But worst comes to worst, Ezreal can use his E to avoid the assassin’s damage and get away (preferably over a terrain).

The next ADC you need to consider picking into assassins like Zed is Sivir. Sivir has one of the best defensive tools in the game, especially for a ranged champion.

Sivir has 2 ways to counter assassin champions like Zed – her E and R.

Sivir’s E is probably the strongest defensive ability type in the game. It’s a Spell Shield that blocks the next incoming ability, regardless of what that ability is. This includes all projectiles, point-click abilities, and all damaging ultimates. In fact, the only thing that Spell Shield can’t block is a ground-targeted AoE spell (Morgana’s W).

Because of this, Sivir is a direct counter to many assassin champions in League that depend on one ability (usually their R).

Remember that using Sivir’s E is all about the timing. Make sure to wait a bit so you dodge the right spell. You don’t want to waste it on a single shuriken because Zed can then finish you off with his R.

On the other hand, Sivir’s R is a massive movement speed boost that you can use to dodge the assassin’s damage. Depending on how well you move, you can avoid each of Zed’s shuriken while sprinting with Sivir’s R.

And that’s why Sivir is one of the best ADCs to play against assassins like Zed in League.

In the third place, we have Tristana. Since Tristana has such an aggressive playstyle in the bot lane, players often forget that she can be a super defensive champion. Yes, Tristana doesn’t have a shield but she’s still a counter to many melee champions, including assassins.

The two biggest reasons why Tristana is such a good ADC against Zed is because she can jump away from his damage with W and push him away with her R. Both Rocket Jump and Buster Shot can help you avoid damage from any assassin in LoL, especially Zed.

The key thing to remember here is to use Tristana’s W after Zed uses his Death Mark. This will likely make Zed miss his shurikens or force him to follow you with his own W. However, Tristana’s Rocket Jump has more range than Zed’s Living Shadows, so you’ll always be at an advantage.

Additionally, you can use Tristana’s Buster Shot to push Zed away from you and dodge the rest of the damage. In a scenario where Zed has already used his R and W and you’ve pushed him away, he won’t have any other way of reaching you (except with Flash).

Obviously, if you’re playing against Qiyana or Fizz, you’ll first want to use Buster Shot to send them back and then Rocket Jump to get to safety. In these cases, you can’t gamble because their damage is simply too high.

Use Tristana’s abilities in this way and you’ll have significantly fewer problems against assassins like Zed.

Read Also: Top 10 Best Items Against Tanks In LoL & How To Use Them!

Samira is one of the most powerful ADC champions in League of Legends overall. But she’s particularly strong against melee champions that would otherwise be lethal to marksmen.

Against Zed and other assassins, you should always play Samira with Flash and Exhaust. And using Exhaust at the right time is essential. Here’s why.

When Zed uses Death Mark on Samira, Samira can quickly use Exhaust and lower the whole damage by 40%. Additionally, she can cast her W – Blade Whirl and block the damage from all of Zed’s shurikens.

Both Exhaust and Blade Whirl need to be timed correctly when playing Samira against assassins. Casting them too early or too late won’t actually help you. But if used at the right time, they will give you all the advantages you need to defeat Zed or any other assassins in a 1v1 fight.

But unlike the other ADC champions in League, Samira actually benefits from melee assassins such as Zed. She deals even more damage in melee range and stacks her ultimate quicker. Samira’s ult is a key ability in her kit as well, so having it ready sooner rather than later is always great.

In other words, Samira is the perfect marksman/fighter champion to play against assassins!

And finally, we have Xayah. I put her in the first place as the best among the ADC champions against Zed specifically. However, she’s pretty good at avoiding damage from all assassins in the game.

The biggest strength that Xayah has when it comes to dealing with Zed and the other assassins is her R – Featherstorm. When cast, this ability turns Xayah untargetable and completely immune to all incoming damage in the game.

So, the best way to counter Zed as Xayah is to use Featherstorm to dodge the initial mark of Zed’s R or when the mark is about to burst.

I’d say that you should always use Xayah’s R as soon as you see Zed casting his Death Mark. You’ll completely stop his attack or force him to miss his shurikens.

Against other assassins, you should be a bit more careful. This means you’ll have to use Xayah’s R before the enemy assassin reaches you. Remember that Featherstorm can’t be cast if you’re silenced or in stun.

Another way that you can use Xayah’s abilities is to root assassins with your E – Bladecaller and don’t let them approach. However, this isn’t always an easy thing to do since the snare requires at least 3 feathers. But if you use Bladecaller after Featherstorm, you can definitely root the assassin in place.

And that’s why Xayah is the best ADC to play against Zed or other assassins in League of Legends!

How to Play Against Zed as an ADC? (Bonus Tips)

Even if you take my advice and play one of these 5 ADC champions against Zed or other assassins, it’s still not a guarantee that you’ll win. LoL is a complex game and you can’t always play by the rules.

However, there are things you can do to increase your chances of winning against assassins like Zed. Here they are.

SUMMONER SPELLS: Make sure you play with Exhaust or Barrier. Exhaust will help you immensely in duels, especially in the early and mid game. Barrier can also be helpful early on since they can block a significant portion of the assassin’s damage

RUNES: Some runes can give you a clear advantage against one-shotting assassins such as Zed.

For example, Bone Plating is a must-have rune for stopping an assassin from deleting you. But runes that increase your armor and magic resist, as well as the healing runes, can be beneficial too.

ITEMS: Zed can only be countered by one item in the game – Stopwatch.

Unfortunately, Stopwatch’s active can only be upgraded to Zhonyas’s Hourglass, which is an AP item only. However, Guardian Angel and armor items like Plated Steelcaps and Thornmail can also be useful.

CHAMPIONS: In case you don’t play any of the ADC champions on this list, you should definitely consider other options.

For example, Veigar is an awesome pick against many assassins, including Zed. He can deal massive damage, constantly stun the enemies, and buy Zhonya’s Hourglass. You can even build Veigar as a full tank to counter Zed and still have enough damage to one-shot him.

PLAYSTYLE: Assassins like Zed benefit from the mistakes of other people. Make sure you’re in a focused mindstate in these games. Don’t get too close to the assassins and don’t face-check brushes alone.

I’ll admit, defeating assassins like Zed in LoL is not easy. You generally try to stop them either with a lot of crowd control or with tons of armor/magic resist. However, the fact is that assassins deal simply too much damage in League of Legends!

Your job as an ADC is to avoid the assassin’s damage as much as possible. It definitely takes skill and practice to cast Sivir’s E or Samira’s W at the right time against Zed. But if you play well, then you have good chances of defeating him and all the other assassins.

I hope you found this guide informative and helpful! Good luck!